Hi there! So yesterday something sad happened, I broke my middle finger nail. It has had a cut for almost two weeks now, and I have tried to fix it with the teabag method just so it could grow out a bit before I had to cut it. Unfortunately the nail wanted to break even more and there was not much to do but to cut it, so I’ve unwillingly joined the nub club. The good thing is that I have a couple of Christmas designs left to show, but I wish that I would have been able to get all 24 with my nails still long and pretty.

Today is day 18 of 24 days of Christmas by Hanninator and I’ve made some ornaments.

For this mani I used The spy who loved me from OPI, Space race from H&M and stamping plate B003 Sweater Weather from What’s up nails. 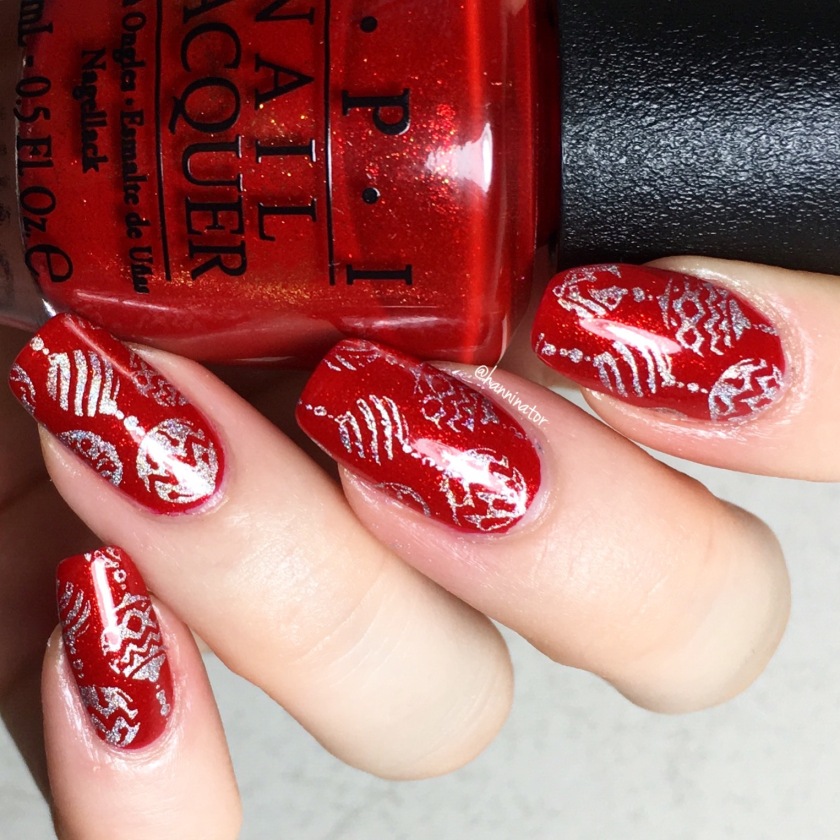 Today I have a step by step tutorial for you, showing how to make a fun geometric accent nail. 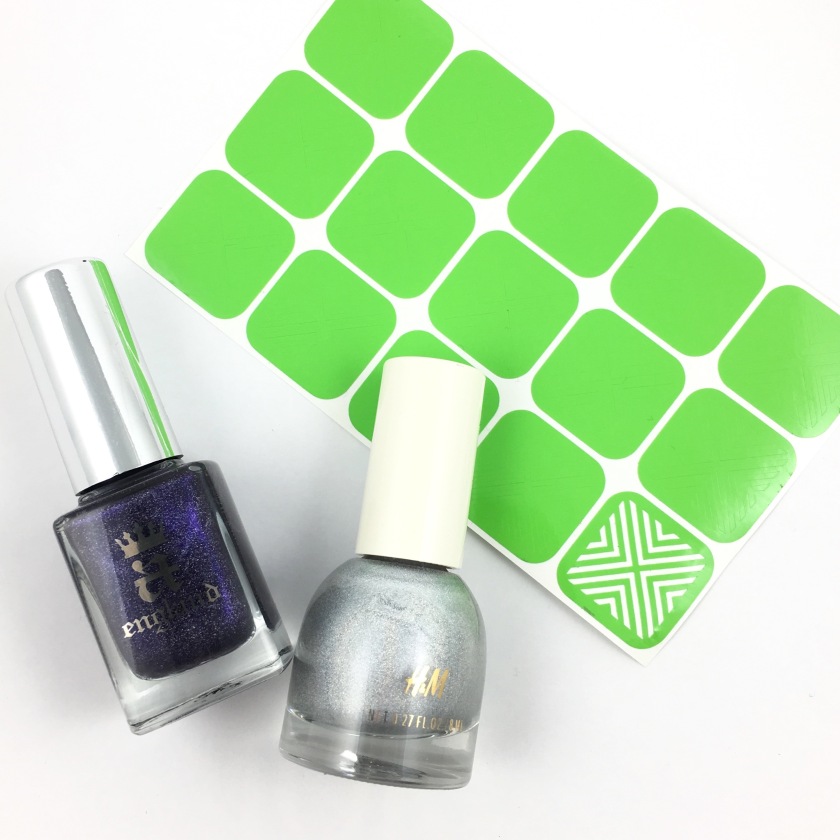 Start by painting two coats of Space Race on the nails of your little finger and ring finger. Paint the rest of your nails with one coat (ocw!!) of Polovetsian Dances. Add a quick drying top coat to all nails, I used Gel Setter from Essie. 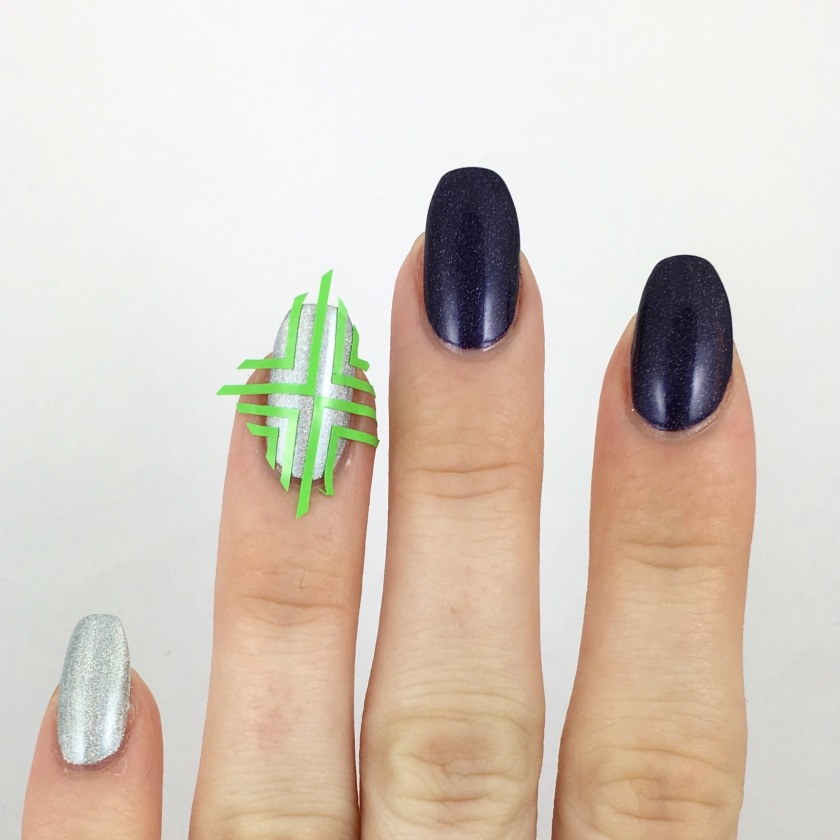 Wait approximately 20 minutes for the top coat to be completely dry. Add nail vinyls on the ring finger to create a geometric pattern. I used the insides from the Right Angle Nail Stencils, I love that this way you can use up the whole vinyl sheet. 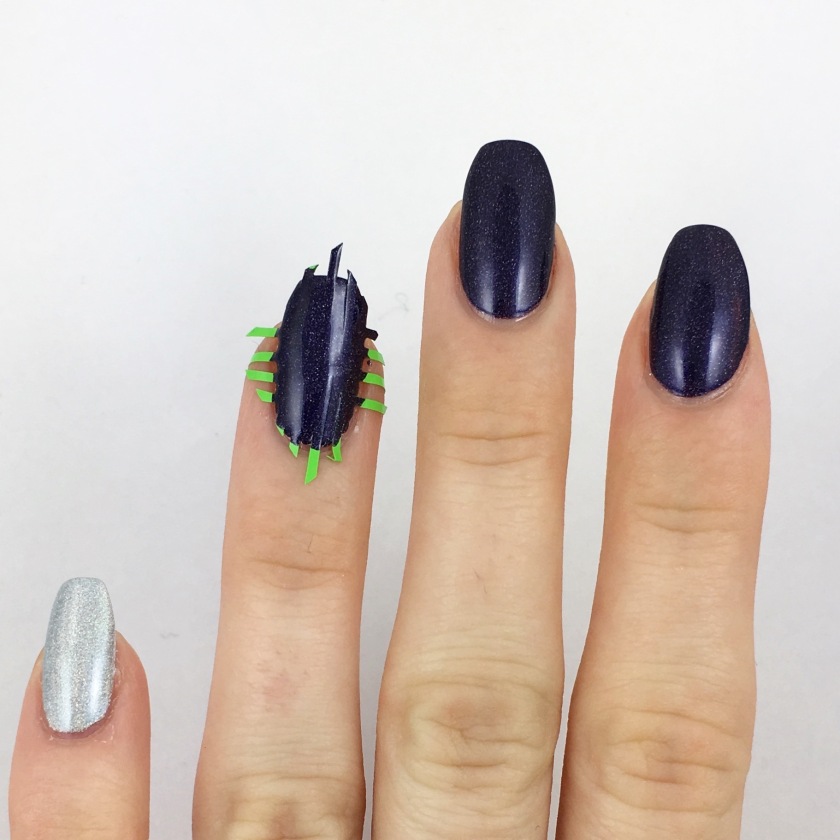 Paint one coat of Polovetsian Dances over the vinyls… 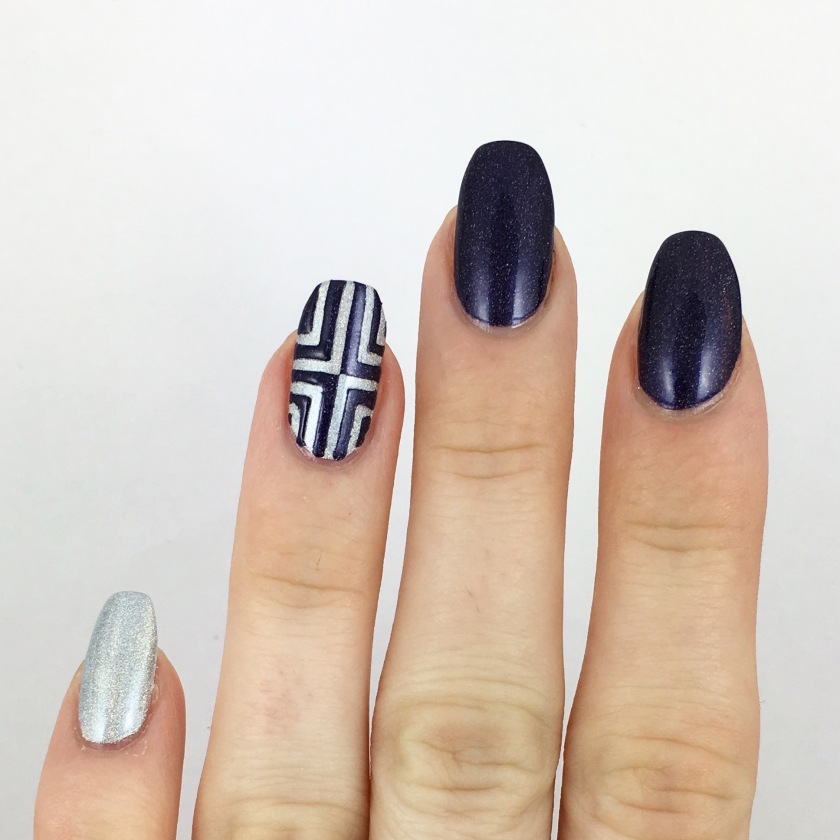 Remove the vinyls immediately, before the polish starts to dry. If you wait too long before removing the vinyls the lines won’t be as clean and the base color might come up with them. 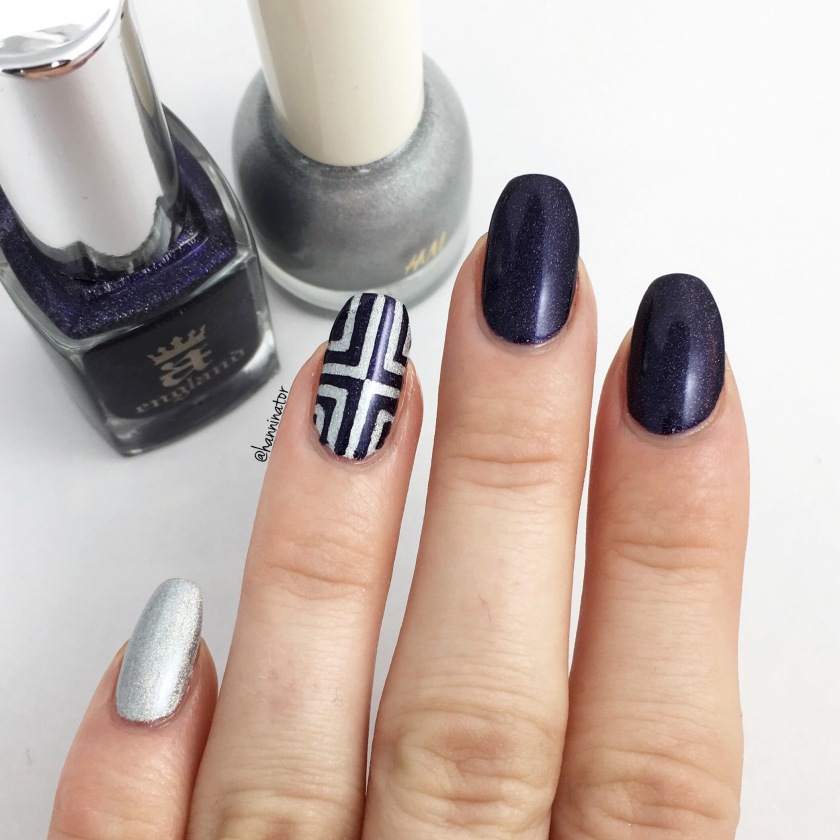 Allow the polish to try for a few minutes then add a glossy top coat.

Hope you like this little tutorial. Is this something you want to see more of here?

Halloween is just around the corner and I have some Halloween themed nail art to show you. Hopefully you’ll find some inspiration! 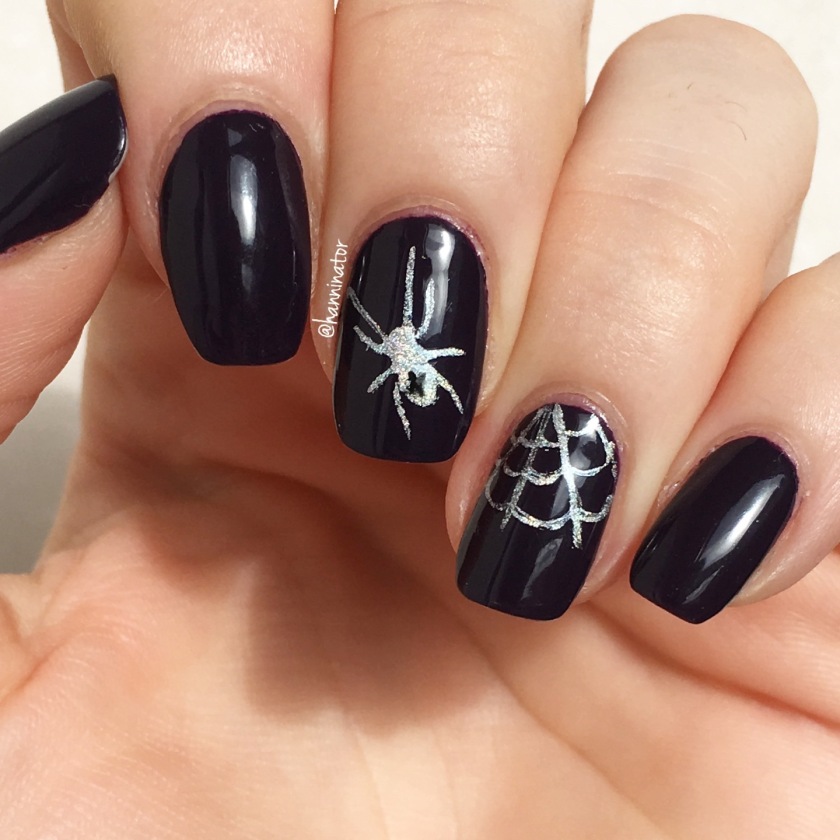 What if you really really don’t like spiders? Well make them holo of course! For this mani I used Kimono-over from Essie, Space race from H&M, Spider stencils from Snail vinyls and some freehand skills. 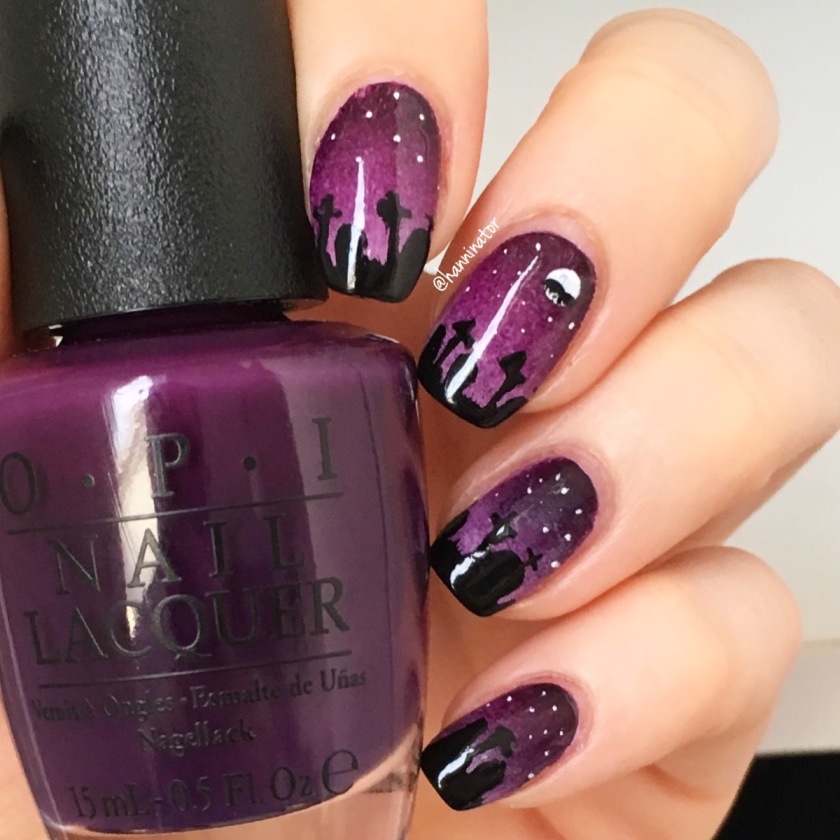 For this mani I used Lincoln park after dark, O Suzi mio, Purple palazzo pants, Lady in black and Alpine snow, all from OPI together with Graveyard stencils from Whatsupnails.

And here is a close-up on the thumb just because it turned out pretty good. 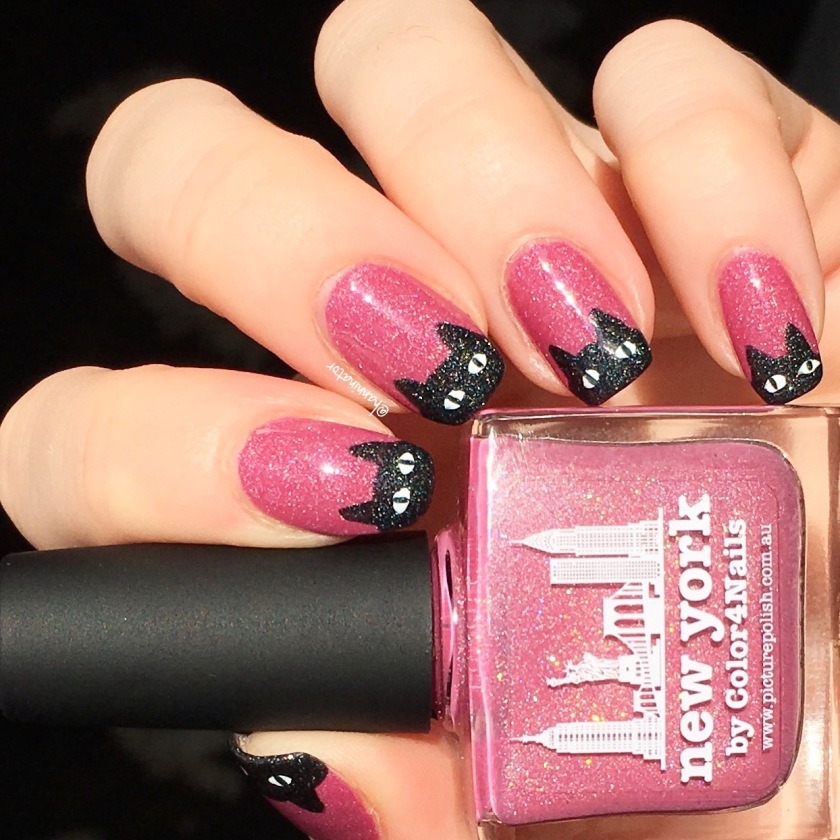 For this black cat french manicure I used New York from piCture pOlish, 5042 Lady Wizard from Depend and Alpine snow from OPI.

The holo spider decided to leave some holo spider webs on my nails. For this manicure I used Black dress not optional from OPI as the base and I stamped with Space race from H&M using stamping plate Mother nature 04 and the crystal clear stamper from MoYou London. 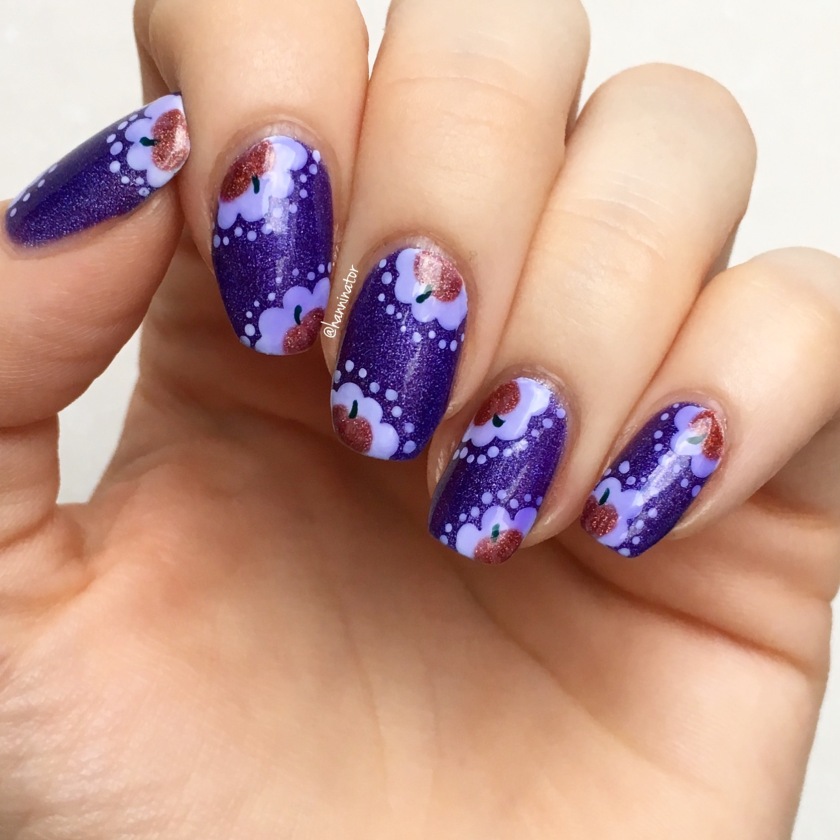 This is a recreation of a mani I did last Halloween, but this time with holo. For this mani I used Unicorn dream, Forbidden witchcraft, Sweet elves, 031 and 497 from Depend.

These spooky fall leaves are inspired by a picture I saw on Pinterest. Someone had painted fall leaves white and then painted eyes and a mouth on them to make them look like ghosts. I though that idea would be great as nail art, and I think I was right! For this mani I used Black dress not optional, Alpine snow and Lady in black from OPI together with Autumn leaf stencils from Snail vinyls.

October is not just Halloween, it’s also breast cancer awareness month, so I decided to combine the two with these pink Hello Kitty skulls. These nails took me forever to make, since I’m apparently not friends with the stamping plate I used. For this mani I used O2 488, 488, 039, black and white stamping polish from Depend, together with stamping plate Fun 9 from Fab Ur Nails.

For this bat-man(i) I used Meow from piCture pOlish together with stamping plate Festive 15 from MoYou London and silver and black stamping polish from Depend.

Did someone say holoween, how cool are these orange holo pumpkins!? For this mani I used Forbidden witchcraft as the base together with 039, both from Depend along with Pumpkin faces stencils and Dot zig zag tape from Whatsupnails.

How will you paint you nails for halloween?

Last fall H&M released their new beauty line and I have tried a few of their polishes. 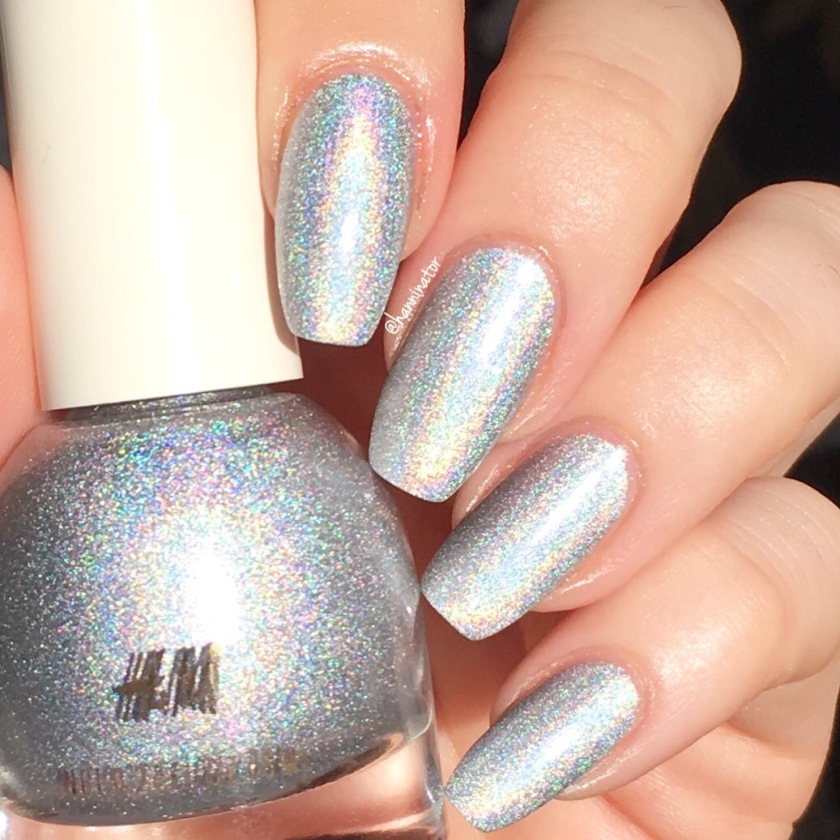 Space Race is a silver linear holo polish that covers in two coats. It dries a bit dull, so make sure to add a glossy top coat.

Yolo Holo is a very sheer pearl polish, here I’m wearing three coats. It is best suited as a topper. I think the name is a bit confusing since this is not a holo polish.

Fairie Holo is a gold holo glitter polish. My nails looked like disco ball with this polish on. Here I’m wearing three sponged coats over one painted coat.

Undersea is a blue metallic polish that covers in two coats. 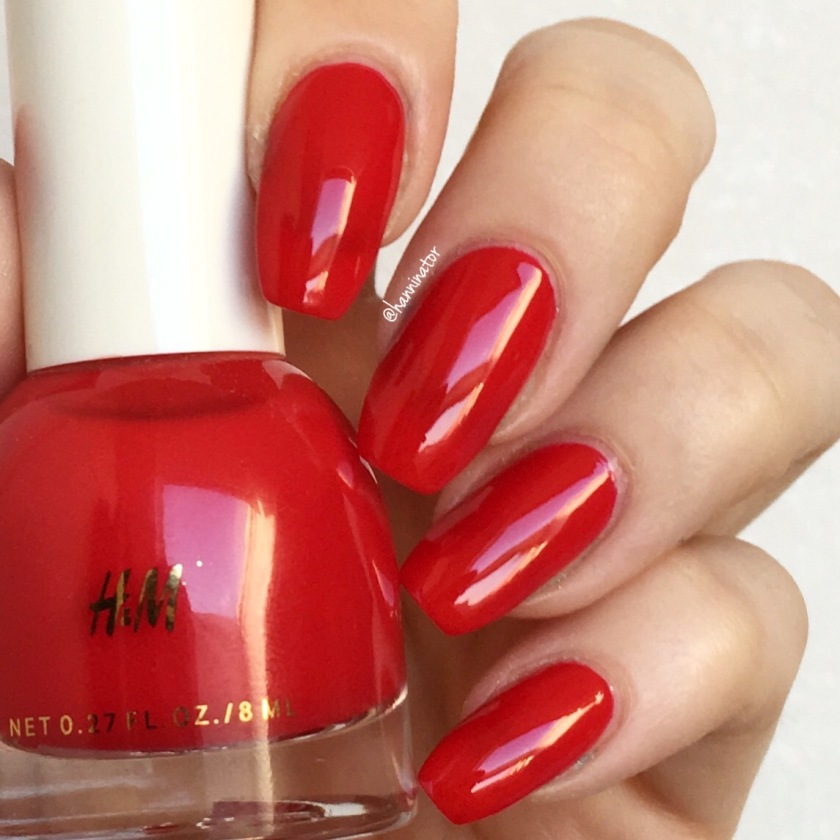 Parisienne is a bright red polish, here I’m wearing three coats and as you can see I still have a bit of VNL.

Over all I’m pretty impressed with the polishes from H&M. They have a brush that is easy to work with and the formula was good. And they are pretty cheap, 49 kr each (though I got a few on sale for 10kr each!!!). Out of these polishes Space Race is definitely my favorite!

Have you tried any polishes from H&M? Did you like them?