Ooops I totally forgot to post my favorite designs from March here in the blog too, you may have already seen them on my Instagram page.

It looks like bright colors and gradient was my obsession this past month! ❤ 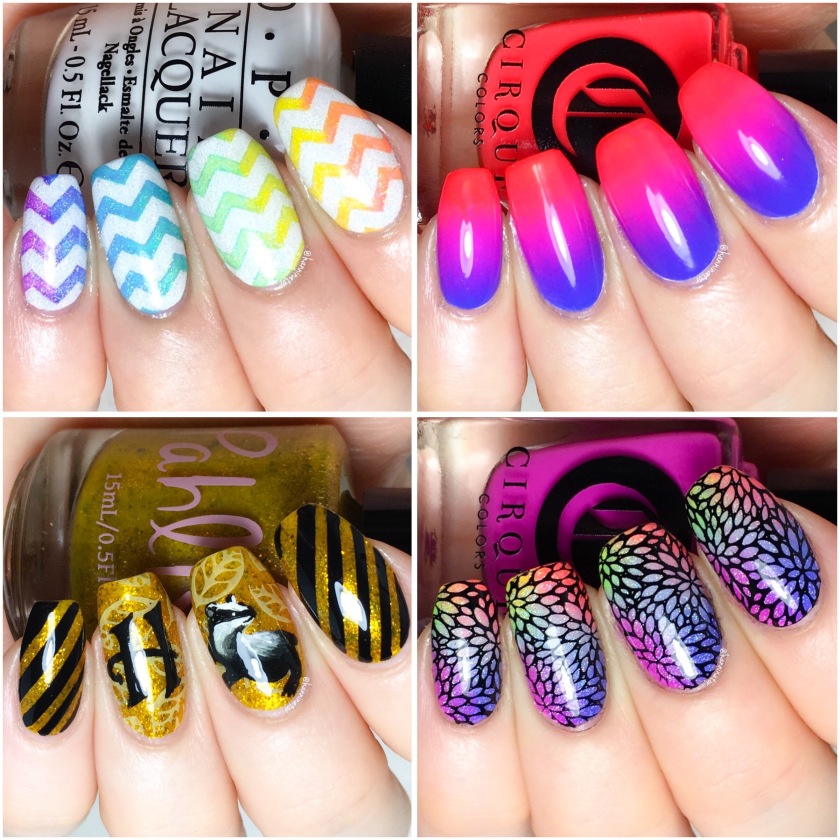 My absolute favorite design from March is my freehanded Hufflepuff nails. Which one of these designs do you like the most?

A while ago I was invited to a Harry Potter themed nail art group on instagram, and since I’m a huge HP fan I was super excited to join. The first theme we decided to create was house pride. This was a bit tricky for me at first, since I didn’t know which house I belonged to. I’ve actually thought about this before, that I should be sorted but I just haven’t figured it out. I kind of knew that it would be either Hufflepuff or Slytherin, and I was happy when the sorting hat finally said “Hufflepuff!”.

For my Hufflepuff mani I obviously had to use Hufflepuff from Pahlish, which is the base for the design. To create the stripes I used Gift wrap stencils from Snail vinyls and Midnight Mischief from Painted Polish. The background for the other two nails are created using stamping plate BP-30 from Born Pretty Store and I just can’t cope-cabana from OPI. Then I used black and white acrylic paint and Detail brush 24 Dance from Whats up nails to paint the H and the badger over the leaf pattern. I finished off the design with two coats of HK Girl for a super glossy result!

I am so happy with these nails and I’m really impressed with how my badger turned out, so be prepared for a lot of photos of these nails! 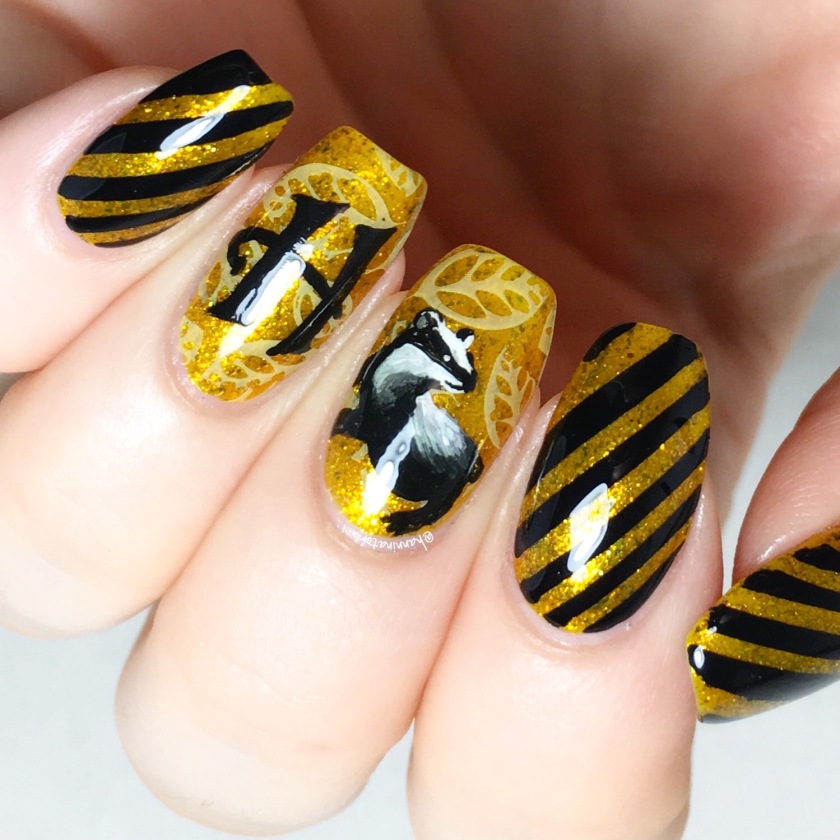 I hope you like these nails as much as I do, and I’m really looking forward to making more HP themed manis in the near future.

Any HP fans out there? Let me know in the comments which house you belong to!

Hi guys! I’m back with a new post with the Harry Potter inspired Pahlishes! Today we’re going to take a closer look at The Wizarding World Bespoke polishes. 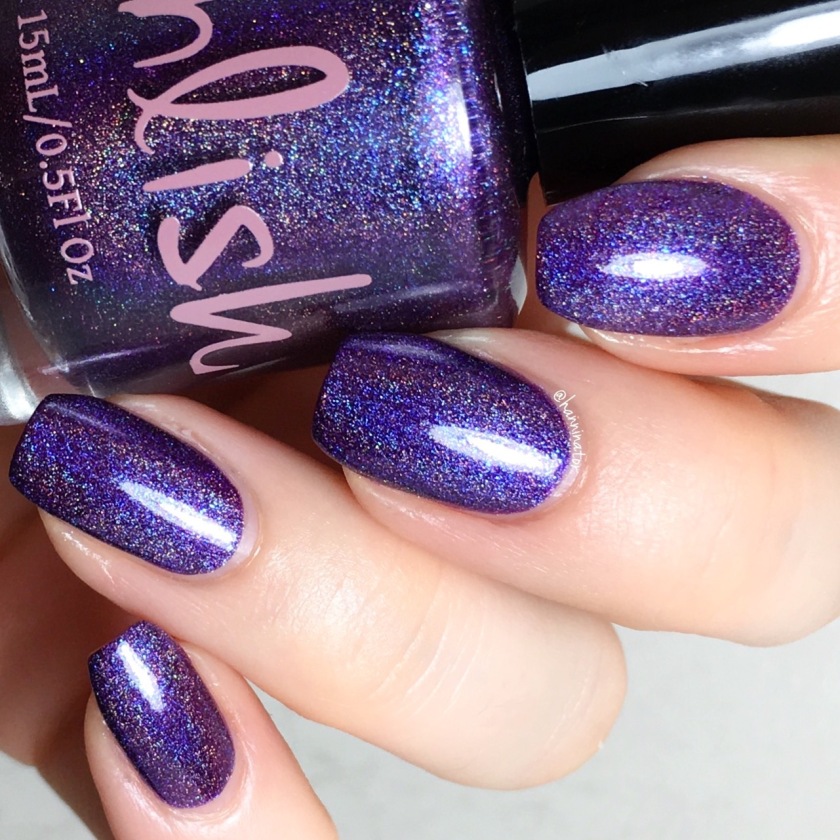 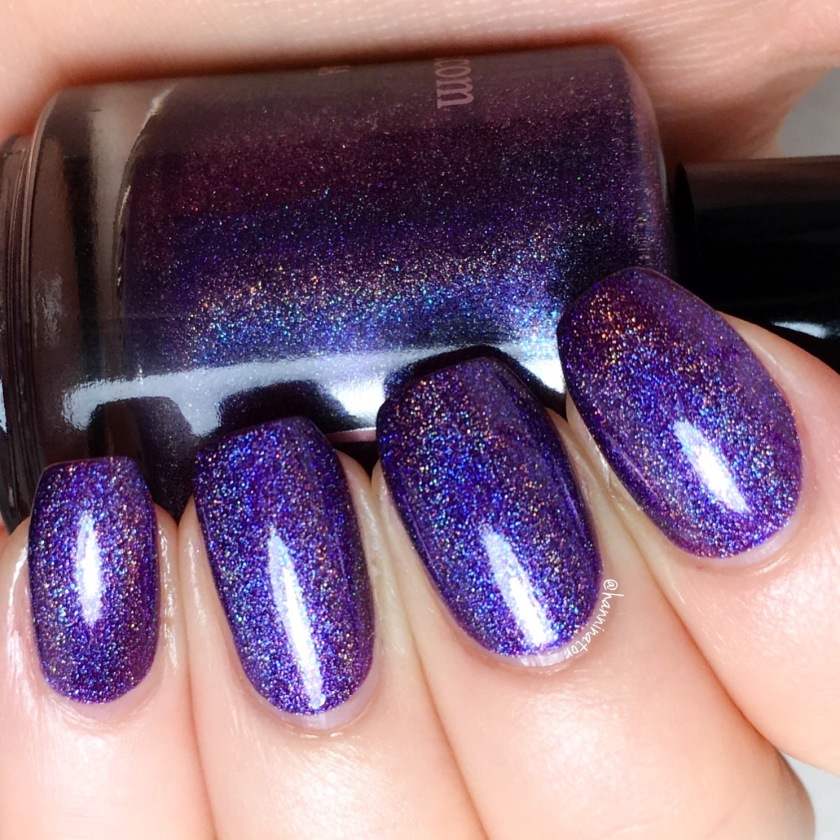 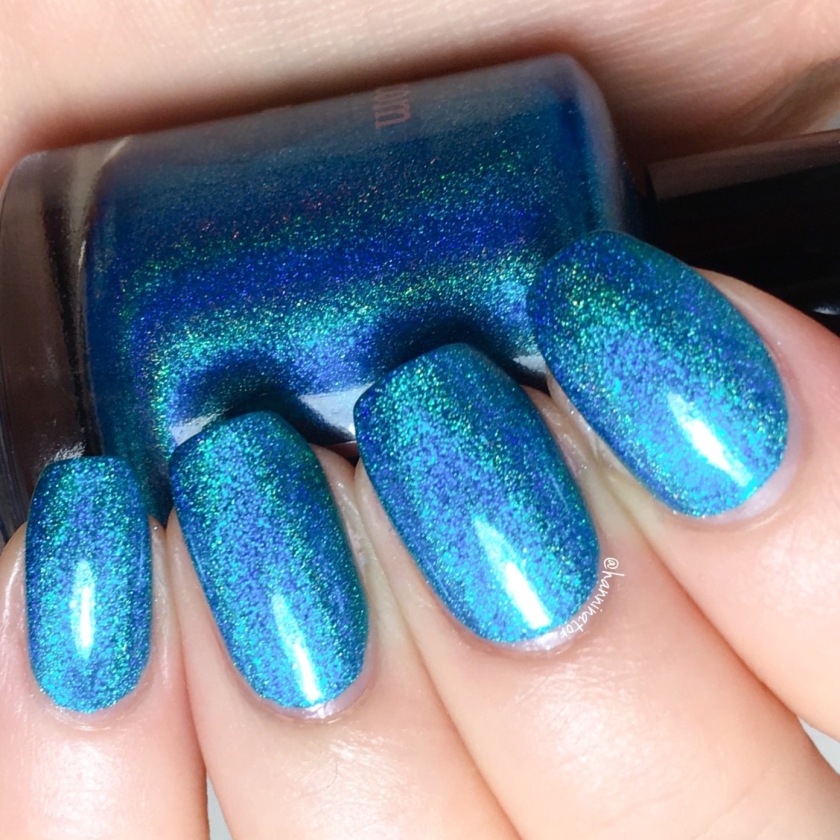 Umbridge is a puple polish with holographic silver flakies and purple shimmer. I’m wearing two coats plus top coat. Now that I look at the pictures I see that I could’ve painted one more coat, just to get a deeper color. 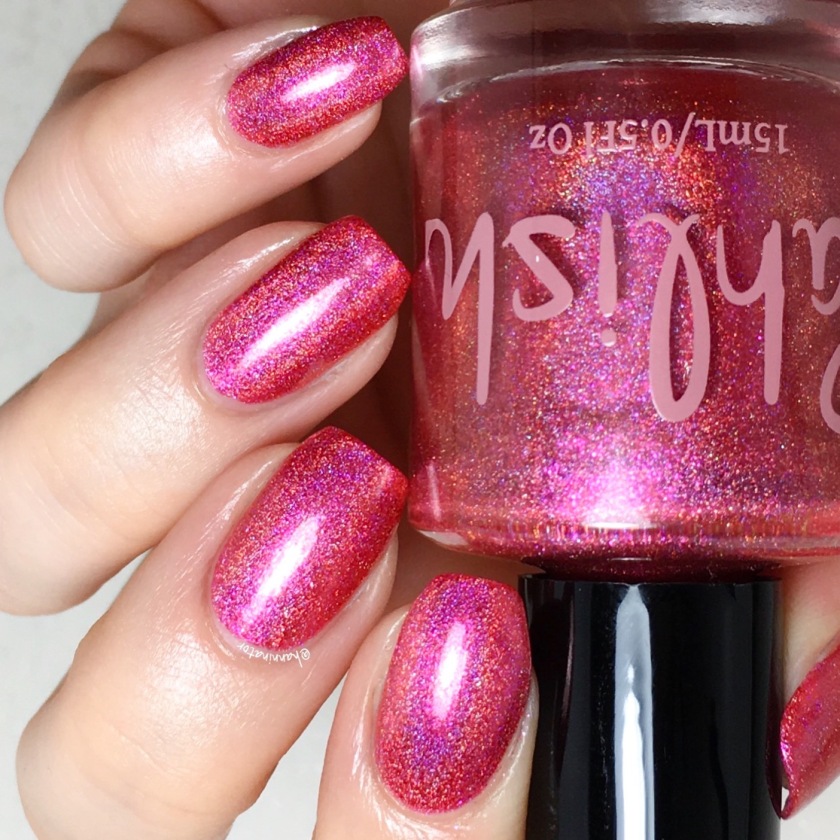 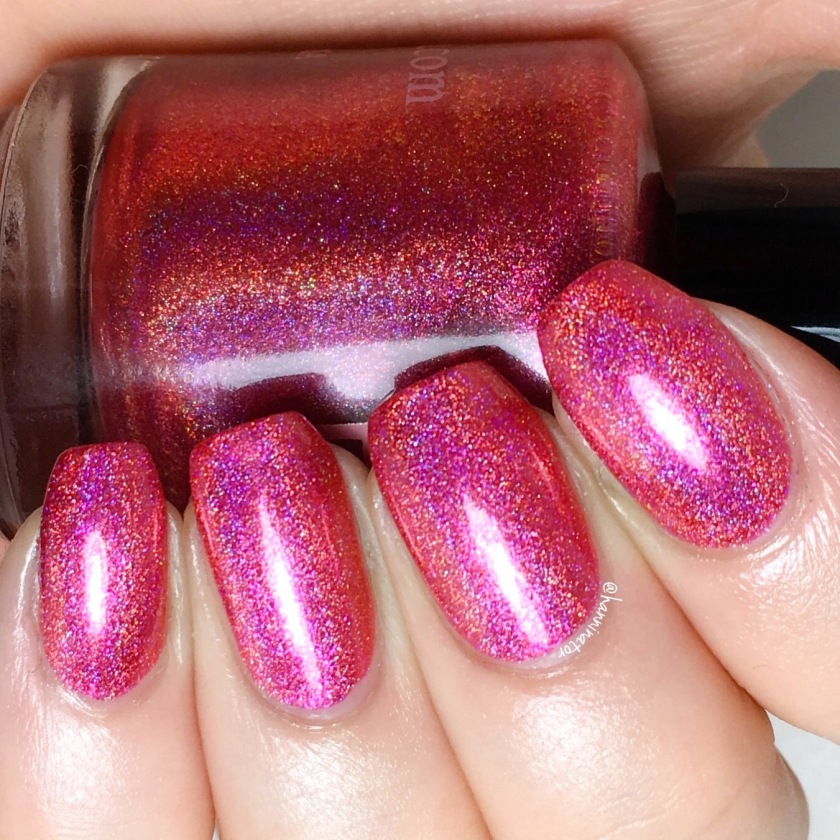 I will post the next part of the Harry Potter Pahlishes in a couple of days, so be sure to check back for that!

Here are my favorite manis from February. I think you can tell from them that I long for spring…

Which one of these do these do you like the most?

On Black Friday last year Pahlish released quite a few Harry Potter themed polishes, and the Fantastic Beasts Trio was a part of that release. I was lucky to snag them earlier this year, and as of right now I think that a few of them are still available in their store. 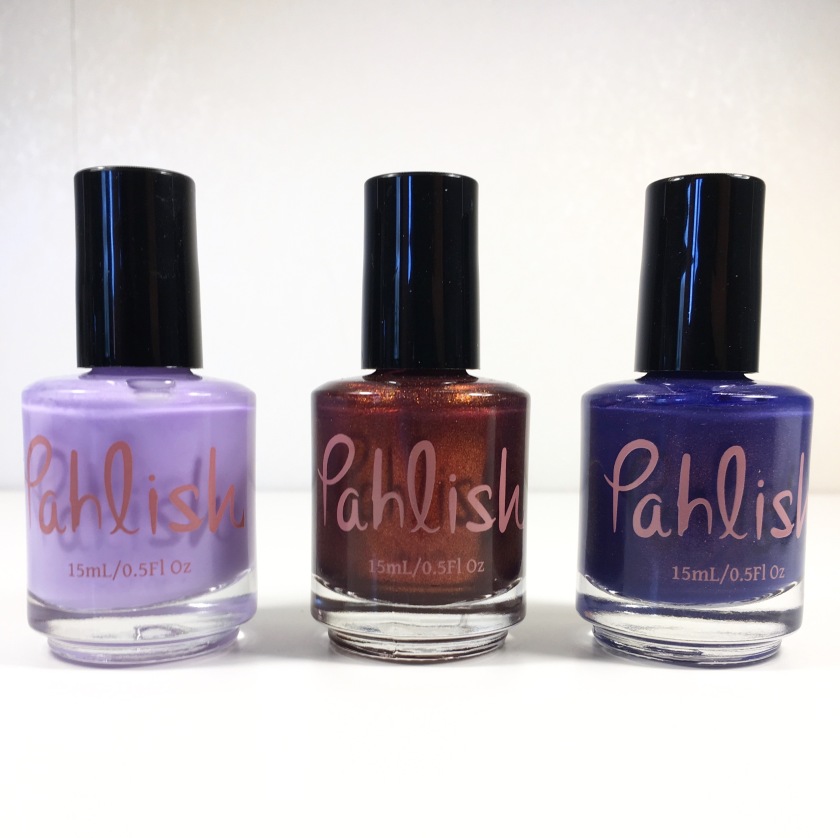 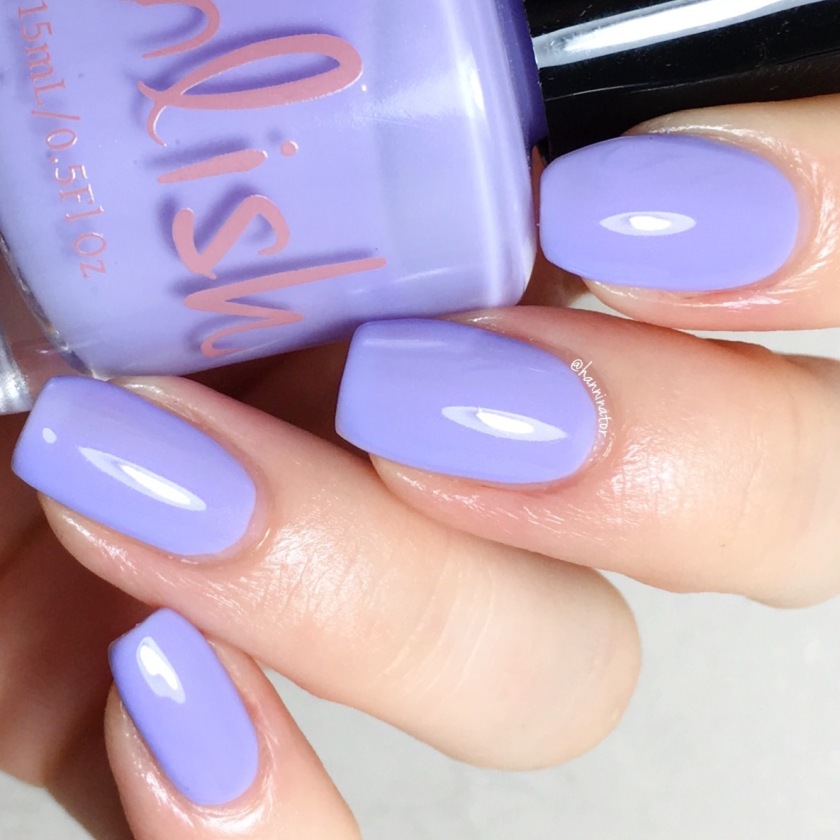 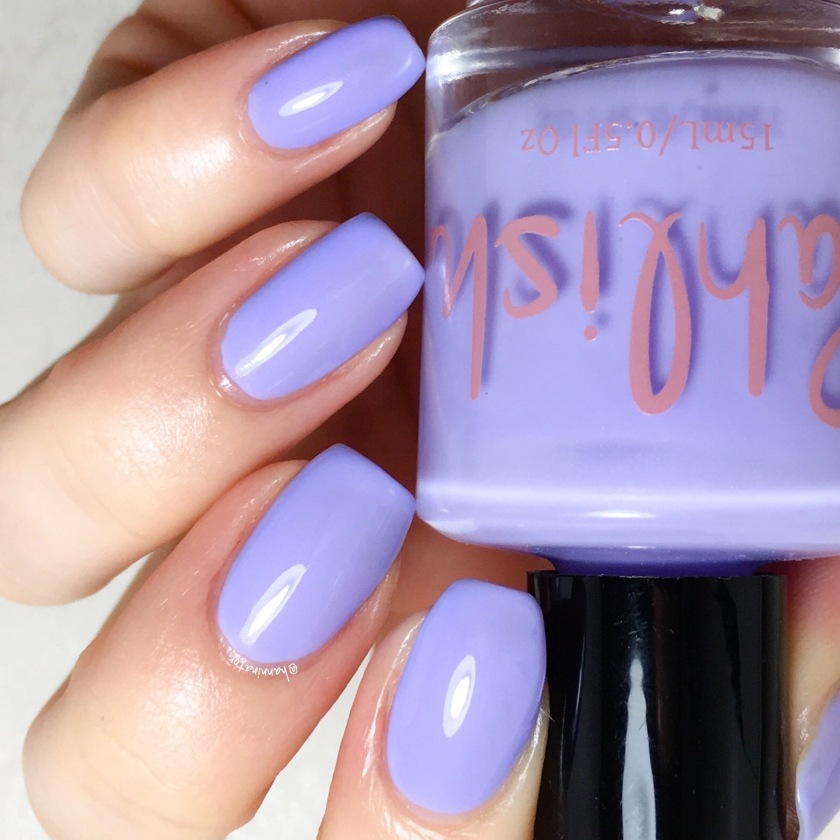 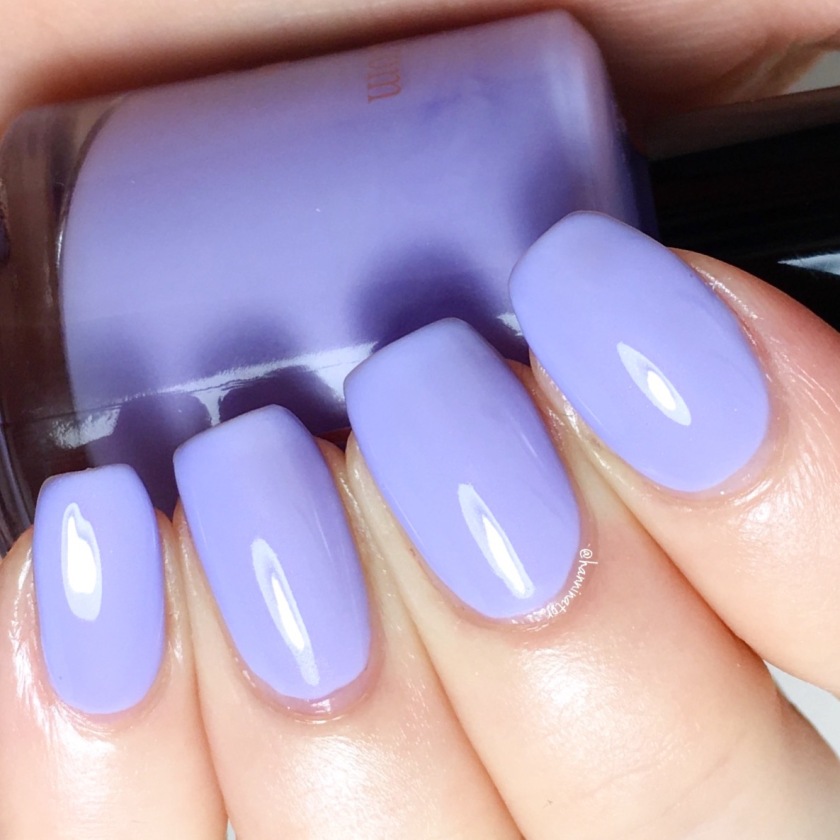 Opaleye is a lavender polish with a subtle violet shimmer. It is very thin on the first coat but it builds up pretty easily on the second one, however I’m wearing three coats (plus top coat) to get it to cover completely.

Hungarian Horntail is a burgundy polish with shimmer. I’m wearing two easy coats plus top coat. In some lights it looks like the polish is on fire!

Short-Snout is a blue polish with copper shimmer. It covers really well in just one coat, I’m wearing two coats plus top coat.

The next part of the Harry Potter inspired  Pahlishes will be up in a few days!

I recently bought some polishes from Pahlish and three of them were mystery Pahlishes. The mystery Pahlishes are a bit cheaper than their other polishes and I thought it would be a fun surprise to get a few of them. And a fun surprise it was indeed, one of the polishes I got was Dumbledore’s army. Can you imagine how excited I got!? This polish was a Black Friday exclusive that I missed out on so I’m so happy to be able to add it to my collection now.

Dumbledore’s army is a green jelly with multichrome and holographic silver flakies and it covers in two coats. The finish and formula reminds me a lot of piCture pOlish’s (which is a brand I love) and the polish was really easy to apply.

I pretty sure you will be seeing more of Pahlish here on my blog pretty soon.